Often referred to as gators, slough sharks, or jacks, northern pike (Esox Lucius) often don’t get the respect they deserve. Northern Pike are one of the most aggressive freshwater gamefish within North America and can grow to be massive, well into 50-plus inches in length and every angler I’ve ever talked with has a personal goal to catch and release a northern pike that stretches the tape to or past the 40-inch mark.

Pike spawn in early spring in the weedbeds. Their eggs stick to live and dead vegetation until they hatch two to four weeks later. Female pike can lay between 16,000 and 60,000 eggs depending on the female’s maturity. During the month of May and into June, anglers often target pike in the shallow water with a variety of baits including crankbaits, topwater baits, and fly fishermen cast large streamers for northern pike. This is a great time to be a pike angler as pike will bite almost anything in your tackle box with all the aggression of a great white shark. However, regardless of the lure you throw, you must be able to make long casts and your lures must give off lots of flash and vibration.

Regardless of the time of year, I’m fishing for northern pike, I start by casting a #2 Len Thompson lure and letting it sink all the way to the bottom with slack in my line before I start my retrieve. Letting the lure free-fall with slack in your line allows the lure to flutter-fall through the water often triggering a strike. A wide variety of colored lures will work such as the proven Five of Diamonds, but my favorite colors or solid golds, solid silver, or colors with the gold, silver, orange, and yellows blended within the lure. These lures give off a great deal of flash and vibration in the water column. The colors also resemble baitfish such as minnows, perch, small walleye, and whitefish which are a common meal for pike within northern water bodies. Once the lure reaches the bottom I begin my retrieve. I will position my boat so I can make long casts and let my lure sink then retrieve the lure fast enough that it gives off vibration as it makes its way through the water column but slow enough that it swims just off the bottom and through the weedbed where pike are waiting to ambush its next meal. In most cases, pike will feel the vibration of the lure through the water column in their lateral line and begin searching for the bait. The added flash of the handpainted lure Len Thompson lure gives the pike a visual target for their final stalk and strike. 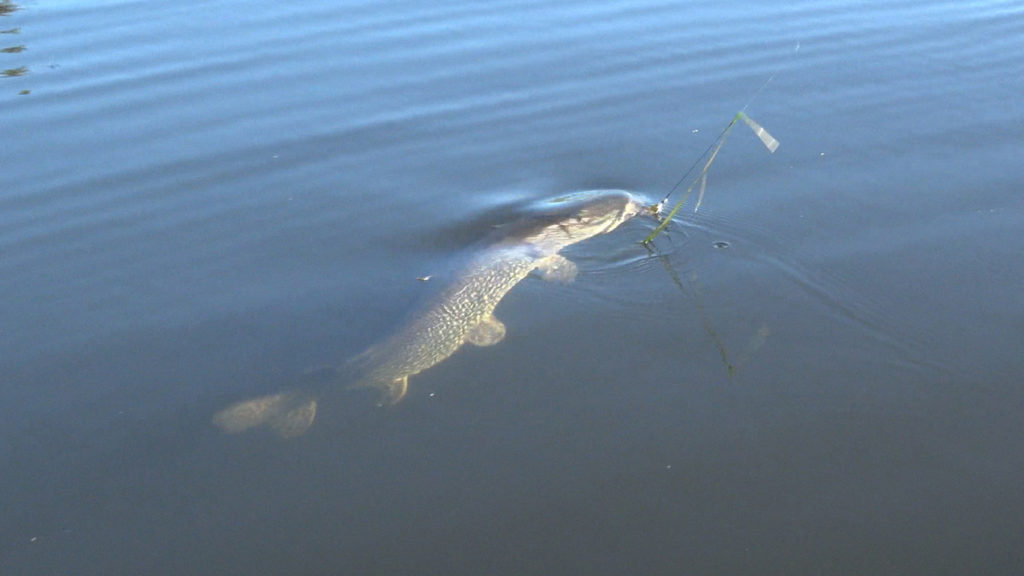 Another great lure for northern pike, especially in deepwater is 4-inch BuzzBomb and Spinnow lures from Buzzbomb Tackle. These lures also give off a great deal of flash and vibration and are heavy lures allowing anglers to make long accurate casts. Both the Buzzbomb and Spinnow lures are also ideal for jigging deepwater or jigging the pockets of deep weedbeds. Both these lures and the Len Thompson lures come with treble hooks attached to the split-ring, however, within the packaging, they also come with a single hook. Changing out the treble hook with the single hook allows the angler to fish weedbeds with less weed hanging up on their lure. Less time removing weeds from your lure means more time catching and releasing northern pike.

Heavy action rods such as the Johnny Morris Carbonlite rod and reels (bait cast or spinning reels, anglers preference) spooled with 20lbs Bass Pro Shops XPS Hyper-Braid line is ideal for northern pike fishing. This setup is sensitive enough to feel and fight smaller pike which are often mixed in with large pike but has the backbone to do battle when the monster pike takes your presentation.

Flash and vibration are key. As soon as the ice is off and the fair-weather fishing season opens, move into the back bays and prepare to do battle with some toothy northern pike.